At the October 2022 Davis Bike Club monthly meeting, Sal Borges gave a presentation about a recent bike tour of Korea, including two videos. The first gives you the flavor of the ride. The second is about the DBC’s relationship with the Sangju Museum, Sangju being the sister city of Davis. These are best viewed full screen on a laptop/desktop with the sound on! 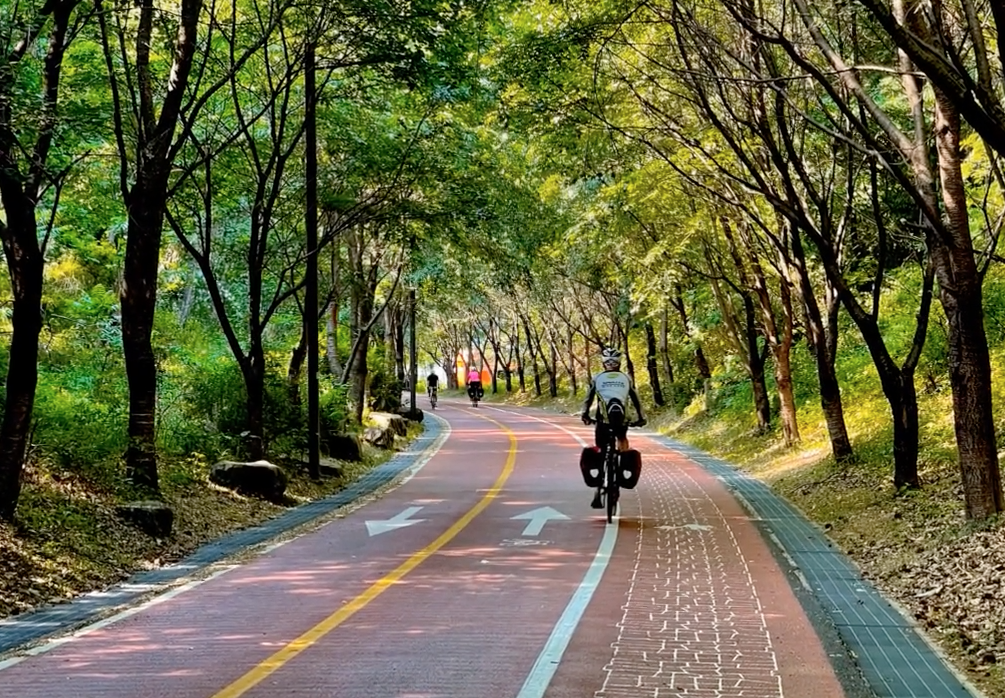 Sal provides this summary of the trip:

Why ride in Korea, when you could be indulging in a croissant with your cappuccino by the Rhône?

We were put up to this by our friend Brent Burkholder who knows South Korea well, since he grew up there, speaks Korean and went back with the Peace Corps, and later on with the CDC.

We are “mature” riders, aged 65-75, with me being the elder statesman. We ride to Winters on Putah Creek Road, occasionally do the Foxy Fall Century (now almost always metric) and sometimes gut it out over Cantelow. We are bike buddies but also bridge playing buddies. Despite the assurances by Brent — of Korea as a biker’s haven, we were nevertheless blown away by the amazing bicycle infrastructure that is seemingly unknown to many outside Korea but also to many Koreans we spoke to along the way. Of the several paths, we chose the bike path from Seoul in the north to the port city of Busan in the south that meanders along 4 rivers.

Instead of going all the way, we rode two-thirds of the way along this path to Sangju which is the sister City of Davis where we found ourselves to be “unofficial” emissaries for the sisterhood. And we came bearing gifts from the DBC!

We also took a side trip to Andong, a traditional hanok village that is a UNESCO World Heritage site. It was here in 1999 that the late Queen Elizabeth planted a tree. It is doing well. And just like us, she took off her shoes when she entered a hanok dwelling!

In Seoul we rented bikes, helmets and panniers, and after the ride, arranged their transport from Sangju to an affiliated bike store in Busan, where we picked up the rest of our luggage sent ahead by the Seoul bike store. From slow to fast….we then sped away on a bullet train!

We stayed at local hotels, a “love motel”, and traditional hanok-style abodes.

We rode 250 miles, crossing 57 bridges, riding through 9 bike only tunnels and climbing 10,000 feet in elevation over 10 days including a rest day. 95% of our ride was on bike dedicated paths.

Our ride was in late May, when Covid restrictions meant you had to jump through a few hoops, but it was surprising to us that we had the whole bike path to ourselves. We only met one foreign couple on bikes with panniers during the entire trip. There were of course a few local Korean recreational riders near the towns we passed by, but we were otherwise lone bikers in the Korean hinterland! From a recent NYT article: in 1963, 39% of South Korea’s population lived in urban areas, now it is 93%. The population of Seoul is a staggering 28 million! However, on the bike path by the river out of Seoul, you would not have guessed it. An overwhelming proportion of South Koreans live clustered in serried ranks of identical high rise apartment blocks — which appear out of nowhere. It is not like the suburban sprawl we are familiar with in the US.

As for croissants with cappuccino, we found a patisserie chain called “Paris Baguette”, so we did get our fix, except it was on the Han River — rather than on the Rhône!

And of course, not forgetting kimchi!